During the RSGB IOTA contest this weekend I worked some stations from a SOTA summit on Hinnøya, EU-033. The propagation was not very good and I soon decided to abandon the contest and work some regular sota chasers instead.

Islands On The Air Contest 2009

I plan to do some casual operating in the IOTA Contest from EU-033 this weekend. As usual I will work QRP and this time also portable from a SOTA summit.

Contest rules: http://www.rsgbcc.org/hf/rules/2009/riota.shtml
Posted by Mads at 6:14 PM No comments:

In October Aage LA1ENA, Kjell LA1KHA and myself will attend the GQRP Convention in UK. We will arrive Liverpool on October 20 and drive to the Lake District where we plan to activate some SOTA summits. The convention is on October 24. The trip back home to Norway is scheduled to Sunday 25 October.

The IARU HF World Championship was arranged this weekend and I attended from our cabin in the western part of Telemark County. I mounted the 14AVQ on a fence post and laid out 2 quarter wave counterpoises for each of the bands. I discovered that the low W3DZZ (5 - 8m above ground) could beat the vertical on almost any distance on any band! Next time I will try to mount the vertical closer to ground and with 16 0.1 wavelength radials according to the manual.

I attended in the category: SINGLE-OP ALL QRP SSB
Posted by Mads at 4:12 PM No comments:

I got an e-mail from the Norwegian Postal Service (Posten Norge) saying that the new IRCs are available for the local post offices to order. They can also be purchased directly from Posten Norge.
Posted by Mads at 4:49 PM No comments:

Email ThisBlogThis!Share to TwitterShare to FacebookShare to Pinterest
Labels: IRCs

Yesterday I visited my local post office to buy a pile of International Reply Coupons. I asked if they had started to sell the new Nairobi Model but they didn't know of any new IRCs. At the end I bought just a few to make sure I'm not getting stuck with a lot of old invalid coupons.

I've sent an e-mail to the Norwegian Postal Service and asked about this.

http://en.wikipedia.org/wiki/International_reply_coupon
Posted by Mads at 10:04 AM No comments:

Email ThisBlogThis!Share to TwitterShare to FacebookShare to Pinterest
Labels: IRCs

Today I've got my self a used Hy-Gain 14AVQ vertical antenna. It's a four band trapped vertical for 10m, 15m, 20m and 40m. I'm not sure if a trap vertical is the best choice for QRP operations but it was so cheap I decided to try it.

I plan to test it from our cabin in the upcoming IARU HF World Championship. Will be back with a report from the contest.

Email ThisBlogThis!Share to TwitterShare to FacebookShare to Pinterest
Labels: Antennas

Today SPRAT issue 139 arrived with the invitation to The GQRP Mini Convention at Rishworth School, Ripponden. I will attend this year as I did last year. The convention is held Saturday 24th October 2009. Here are some of my photos from the convention in 2008: 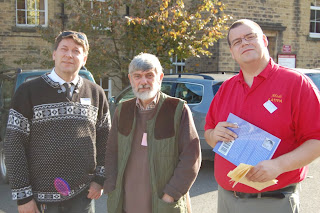 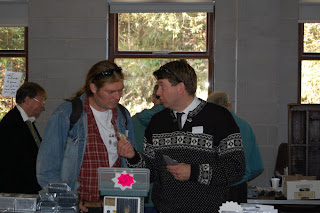 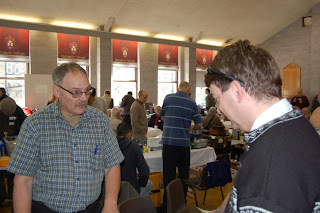 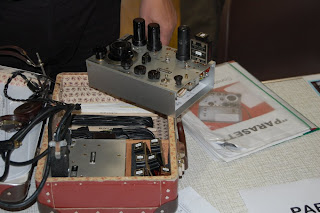 Traders and visitors in the large hall at Rishworth School 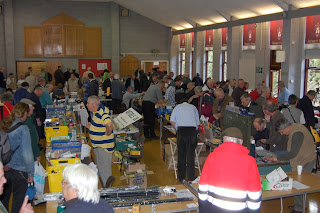 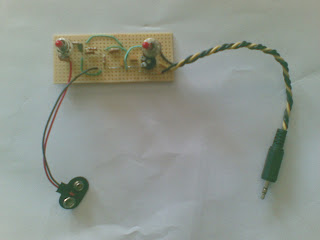 Yesterday I built the Simple Telephony Transmitter Tester by Steve Hartley G0FUW found in Hot Iron issue 64. I built it on a perfboard with copper islands. The circuit is a simple audio oscillator often used for morse code practice. I intend to use the tester to align the Brendon transceiver that I've built.

The problem is that I can't get it to oscillate! I might have blown the BC212 transistor as I didn't bother to get my ESD protection mat and wrist strap from the basement. Luckily I ordered more than one BC212 so I will replace it and check if that was the problem.

Hot Iron is the newsletter of Tim Walfords Construction Club. You will find the website of Walford Electronics at http://walfordelectronics.co.uk/
Posted by Mads at 11:16 AM No comments:

Last night I stopped by at the club station to check if the 10m band was open. I worked a couple of stations before M0HLT asked me if the NRAU Activity Contest was about to start. I told him that I didn't think so and that NAC is only arranged every second thursday of the month.

After finishing the qso I checked with the NRRLs webiste and found out that I was wrong. NAC is arranged the first thursday of the month. I tried to look up Andys e-mail on the web to correct the misleading info but couldn't find it. I'm terribly sorry Andy!

I joined the contest and worked 12 stations in the one hour SSB part. All with an Kenwood TS-570D turned down to 5w and a vertical CB antenna.

I could see from the DX cluster that an OHØ-station was active but the skip was to long to work him. To bad as I need Aland for my DXCC.